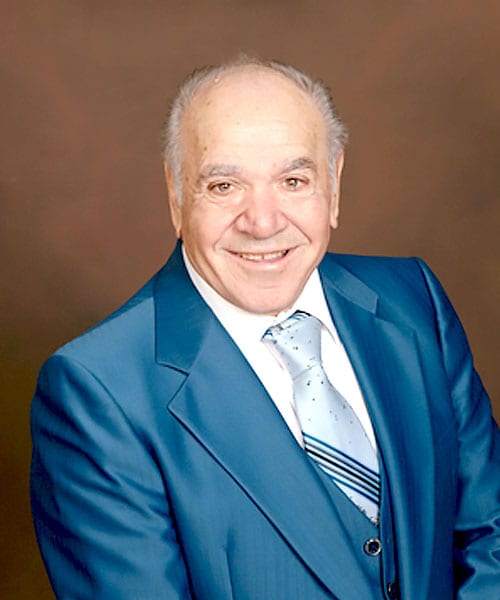 Joe Vicari was born in Palermo, Sicily, and was raised in Chicago, Illinois. After completing trade school to become a tile and flooring installer, he eventually opened his own successful business. As a young man, Joe enjoyed bird hunting and working with pointing dogs.

In 1966 Joe and his wife Pat moved from Chicago to Medinah, Illinois, where they raised their six children. He bought his first German Shorthaired Pointer in 1971 and subsequently entered the dog in field trial competition in 1972. After placing this young dog in field trials, Joe realized how much he enjoyed the competition. With Mother’s Day just around the corner, Joe decided that Pat and the family needed another dog. He purchased a puppy from a litter whelped out of Field Trial Hall of Fame Checkmate’s Dandy Dude and Wyoming Gretchen. Joe registered the dog as P.J. Wildfire with the call name of “Sport.”

Joe trained and handled P.J. Wildfire, working the dog in the evenings or weekends often after a hard day’s work. These efforts produced dividends as P.J. Wildfire became and is recognized as one of the outstanding Shorthairs in the breed. This dog, who has the most wins of any dog in the history of the breed, had 12 hour wins and placements, over 100 American Kennel Club wins and placements, and 86 American Field wins many in open competition. P.J. Wildfire was inducted into the German Shorthaired Pointer Club of American (GSPCA) Field Trial Hall of Fame in 1991 and into the Bird Dog Foundation Hall of Fame in 2009.

Training, handling, and campaigning Shorthairs for over 40 years, Joe has finished 21 American Kennel Club (AKC) Field Champions and 15 AKC Amateur Field Champions. He has over 1,000 AKC and American Field wins and placements and over 55 one hour Championship wins and placements. Three other of his dogs, Wildfire’s Angel, Nicky Von Blitz, and P.J. Wildfire’s Super Sport have also been elected to the GSPCA Field Trial Hall of Fame. Joe additionally handled four National German Shorthaired Pointer Association (NGSPA) “Dogs of the Year:” P.J. Wildfire the Shooting Dog of the Year in 1984; Nicky Von Blitz the 1989 Amateur Shooting Dog of the Year; and Wildfire’s Angel the 1991 and 2003 Amateur Shooting Dog of the year.

Joe’s influence on the German Shorthaired Pointer breed has been extremely significant. Over the years, the positive influence of dogs he has bred on the Shorthair gene pool is huge and nearly impossible to quantify. The number of dogs out of his breedings owned and handled by others is myriad. These dogs continue to be a strong influence on the genetic pool of this breed.

Contributing to every aspect of bird dogs and field trials through the years, Joe has also judged numerous field trials for most of the pointing dog breeds. These assignments included weekend trials conducted under the auspices of the AKC or the American Field. His judging has included numerous one-hour championships, regional championships, and National Championships for a number of different pointing dog breeds. He has conducted seminars with Delmar Smith, Bob West, and Bob McKowen to assist newcomers to the sport in the development of their dogs as well as provided bird dog demonstrations on Midwest Outdoors.

Joe has served in numerous official capacities with the Fort Dearborn German Shorthaired Pointer Club (GSPC), the GSPC of Illinois, Rock River GSPC, and NGSPA Region 5. He has served on the board of directors of the NGSPA, the National German Pointing Dog Association, and the Field Trial Clubs of Illinois. In addition, Joe has served as field trial chairman for numerous field trials, ensuring the smooth running of these events.

Joe Vicari is most deserving of being elected to the Field Trial Hall of Fame for he has worked relentlessly for the improvement of field trials, pointing dogs, and especially the German Shorthaired Pointer.