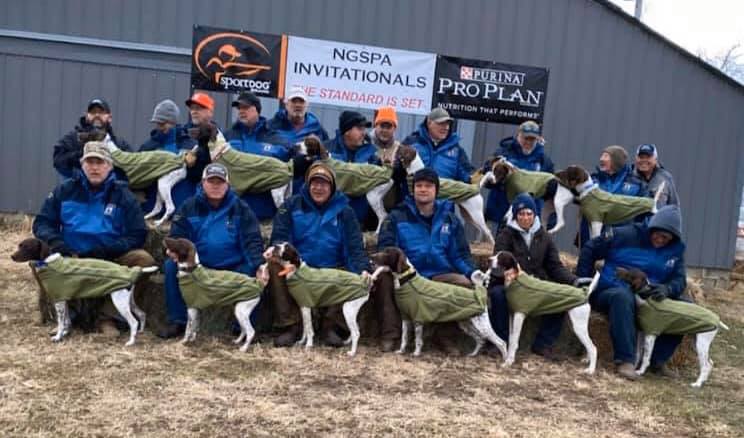 By limiting the entry to twelve top performers from the previous year’s major trials, the NGSPA Invitationals become the “de facto” all-star events for the open shooting dog class and the all age GSP. They are not intended to identify a champion performer, but to establish the “best of the best” from a field of champions.

To fulfil this purpose, the Invitationals feature a unique format intended to provide a fair and rigorous test for the dogs. By requiring three hours of performance over three days of competition for shooting dogs and three and a half hours of performance over three days of competition for all age, the Invitational format eliminates, to the extent possible, the “luck of the draw”, and requires consistency of effort rather than a single flash of brilliance. Further, the Invitationals are the premier endurance tests offered by the NGSPA and are intended to exemplify the endurance of the GSP at its best. Our format is modeled after the American Field Open Quail Championship Invitational which was first held in 1941, and the AFTCA Invitational.

As with the other Invitationals, the top 12 invited dogs will run one hour stakes two days in a row with a call back on the third day. In a move to substantially raise the “performance” bar, the call-back will be a 90 minute stake. This will be the first 90 minute endurance stake in the entire GSP world, and coming after two days of running will truly test the dogs.

This trial will be held at the Hell Creek Field Trial grounds in Mississippi. It will be the only NGSPA trial held on these challenging All-Age grounds. The launch date of this prestigious event was January 4-6,2019.

Taken together these two decisions by the NGSPA Board of Trustees are expected to raise the standards of performance for the entire GSP breed. Indeed the future is bright for those who compete and hunt this remarkable breed.

These standards when applied should examine the total performance of the dog with All-Age range being kept foremost in mind. The Invitational seeks to identify the epitome of the All-Age dog class, an individual with strength, courage, intelligence, and “game sense” at the highest level, operating on the cutting edge of excitement and range. A flawless performance should not be favored over one that, although imperfect, thrills with the magnitude of the effort.

Standards for Both Open and Amateur Invitationals

The Invitationals seek to identify the epitome of the shooting dog class, an individual with strength, courage, intelligence, and “game sense” at the highest level. A flawless performance of pedestrian quality should not be favored over one that, although imperfect, thrills with the magnitude of the effort.