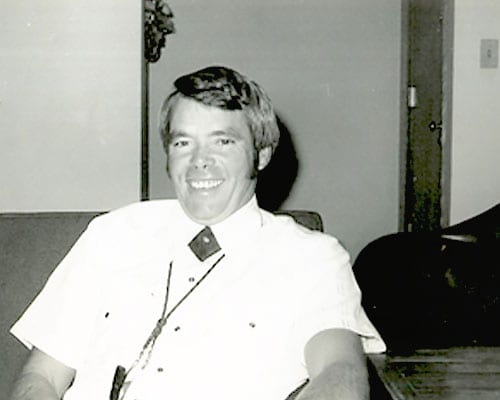 Dave McGinnis was born and raised in Canton, Illinois.  After high school, he enlisted in the United States Marine Corps and became an excellent marksman as well as a boxer who competed successfully in inter-service boxing events.

After his service years, Dave moved to Washington State and worked for the Albertson food chain.  Through the influence of Paul Shoemaker, he started to train Labrador retrievers in his spare time.  As his interest and skill in retrievers increased, he befriended Paul’s brother, Dick, who had a kennel and training facility for pointing dogs.  Subsequently, Dick sold his kennel and business to Dave who then entered the pointing dog world.  Dave would subsequently relocate his kennels and business in Meridan, Idaho, in order to train on wild birds.

Dave won the NGSPA National Championship in 1971 and 1972 with Patricia v Frulord, in 1975 with Ammertal’s Lancer D, and in 1980 and 1981 with Erlicher Abe.  He also garnered the runner-up spot in this event in 1971 with Erdenreich’s Major and in 1979 with Checkmate’s White Smoke.  He won the GSPCA National Championship with  Patricia v. Frulord in 1971, Frulord’s Tim in 1976, Checkmate’s White Smoke in 1981, and Erlicher Abe in 1982.  He won the GSPCA National Gun Dog Championship in 1979 with Uodibar’s Mouse and in 1982 with Lancer’s Royal Scout.  He finished numerous AKC Field Champions, won regularly in NGSPA one-hour stakes, and handled Shorthairs to a total of 23 National titles.

Dave attracted a strong cliental base through his personal charisma and excellent skills and record in dog training.  Dave was not a duplicitous person—if he liked you, you knew it; if he didn’t like you, it was equally clear.  That was simply his personality—one  his friends and supporters found refreshing and inspiring.

Dave McGinnis lived but 49 years, his life cut short by cancer at a time when his impact and positive influence on the Shorthair field trial world was ascending.  Dave’s life, his values, his work ethic, and his example impacted the lives of many.  He strove daily to do his best, never losing sight of life’s real goals and priorities—personal integrity, family and friends, hard work, and perseverance.

While many will recall Dave’s skill with horses and dogs, most will tell you that the endearing memory of Dave was his broad smile and twinkling eyes, set in a face weathered by constant exposure to the elements.  There was genuineness about Dave McGinnis who strove for perfection and whose word was his bond.