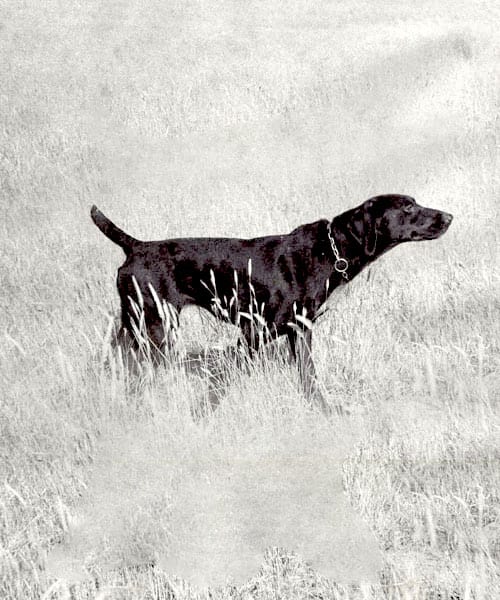 Ammertal’s Kitt Von Shinback, FDSB # 934927, was the product from a mating of Esser’s Chick and Melissa V Greif. Kitt was bred and originally owned by John Hulcey of Notus, Idaho. When she was four years old, she was attacked by another dog. When her wounds became infected, John was going to put her down. Gary and Carolyn Stevens of Caldwell, Idaho, convinced John to let them have her. He and Carolyn nursed Kitt back to health and then placed her with David McGinnis, a professional trainer. Dave won the National German Pointing Dog Shooting Dog Championship with Kitt in 1972.

Kitt was an extremely strong dam and passed her ability down to her progeny. She was bred to several different males and produced field champions out of each of them. She produced seven American Kennel Club Field Champions and three Amateur Field Champions. Her get annexed the titles of the German Shorthaired Pointer Club of America (AKC) All-Age Champion and the National German Shorthaired Pointer Club of America (NGSPA) National Champion. Five of her get placed in AKC National Championship trials and four of her get placed in the American Field Championship trials. She produced one AKC Futurity winner and one NGSPA Futurity winner along with other dogs that placed in these futurities.