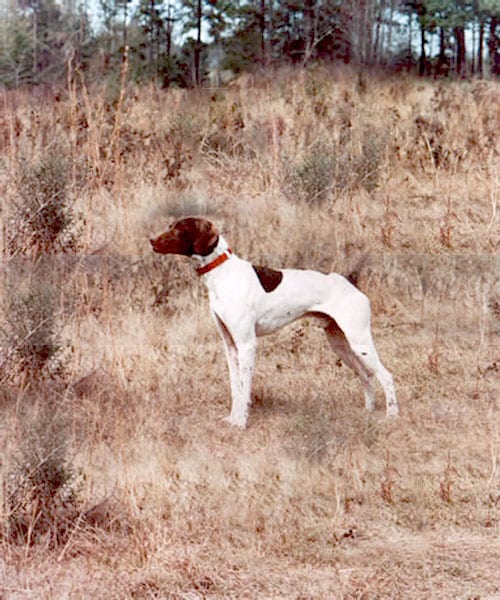 KJ’s Hightailing Saddle, FDSB # 1306629 was whelped on April 11, 1988, out of a mating of Direct’s Fine Line and Joyce’s Hightailing Krystle. Saddle was bred and owned by Kevin and Maureen Joyce of East Northport, New York. Saddle was handled by Daniel Burjan in open competition and by Kevin in amateur competition.

It was evident early on that Saddle was something special. At three months of age Saddle was way ahead of his littermates in desire, confidence, boldness, and extreme range. Daniel Burjan worked Saddle at his farm in New Jersey and in Thomasville, Georgia, during the winter months preparing for the upcoming field trial season. Saddle placed third in the National German Shorthaired Pointer Association (NGSPA) National Futurity in the Spring of 1990 and followed this with first place wins in the NGSPA Region 5 Derby Classic and the National German Pointing Dog Association Derby Classic.

Saddle won his first American Field one-hour Championship at the Region III in Florida at just under 3 years of age. He continued on with his winning ways annexing five more Championship titles including the 1992 NGSPA Pheasant All-Age Championship and annexing the runner-up spot in seven one-hour championships.

KJ Hightailing Saddle had an impressive production record. He was the sire of 49 American Kennel Club Field Champions. The records of the Field Dog Stud Book reflect that he sired 67 dogs who amassed a total of 619 wins. Included in this number are 19 Shorthairs who won one-hour championships many of whom had multiple wins.

Saddle had and is still having a significant impact on the German Shorthaired Pointer breed. One of his greatest contributions has been the number of dogs which he sired and that amateurs have been able to train on their own and then handle to field trial wins and placements.