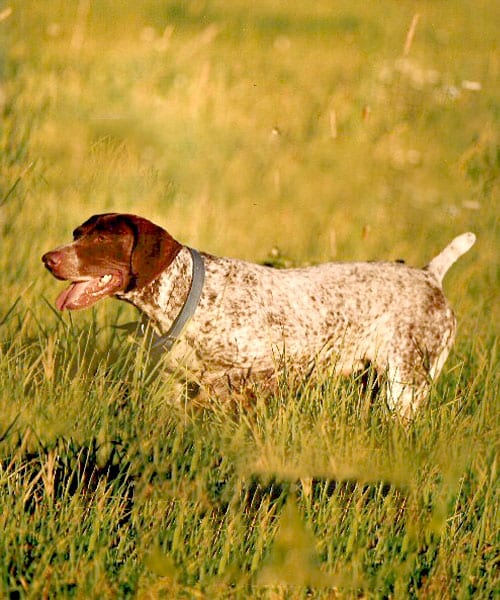 With her extraordinary field trial performances, Leipchen Buddendorf, German Shorthaired Pointer female, FDSB # 204010, set a standard to which others might aspire. She campaigned in national field trial competition throughout her career, achieving an admirable list of titles including five National Championships.

Leipchen Buddendorf’s achievements also include the following honors. The Gulf Coast German Shorthaired Pointer Club awarded her their Field Trial Dog of the Year award in 1986 and 1987, and the Field Trial Clubs of Illinois recognized Leipchen as their German Breed winner of 1986-1987. Another honor was the Hubertus Hannover Award from Germany. She was the first recipient outside of Germany to be awarded this bronze plaque. It was presented by representatives from Germany in 1987. While the reigning AKC National All Age Champion, Leipchen also earned her confirmation title. She accomplished this in approximately eight weeks of competition when she was eight years old.

Leipchen was the essence of what it takes to win a trial: she ran the cover, stayed on the right side of the wind, and had intensity on point. Additionally, the way she held her tail and showed her strong desire to keep hunting right to the last minute of the hour-long brace was admirable. When Leipchen won her second consecutive German Pointing Dog National Championship, she accomplished what no other dog had been able to do in the forty years of this event. She then went on to retire the trophy with the third consecutive win in the hour-long stake. She ran easy and fast. She stood her birds in heavy cover staunch and still.

The following is from a taped description by Judges Terry Trzcinski of Illinois and Harold Brown of Texas of Leipchen’s 1987 German Shorthaired Pointer Club of America National Championship win:

“We broke away on the backside of the course and she was scratching gravel; when we got through the apple orchard, she was off to the left and the grass was real high with tall weeds in the center, possibly bitter weeds. Ed [Husser] tried to kick up a bird. How the dog ever smelled it, I don’t know—Ed finally said this cover is too heavy, I’ll take a nonproductive. We crossed the road and caught up with the other handler and the dogs took that long tree line. She suddenly swapped ends and pointed but bird was missed by the gunners. We crossed the bridge, she made a turn and started up the other side and went on point and as we were riding up, the bird lifted, she was still standing, head and tail up, I never once saw the dog’s tail move. When we broke away from there we started uphill to catch up at a pretty good clip, the wind at our backs, we looked and saw a Chukar in the air and the dog was standing there, head and tail up. We went on and when we found both dogs, the handler saw her standing in the nice valley with the green stuff; this was the most spectacular piece of bird work, just outstanding. Ed knew the bird was gone, she relocated at 100 yards almost to the creek and corrected herself and went to this little island and pointed like a ton of brick. Ed flushed and bird was killed and retrieved. After this find, she literally tore the course apart. It was as if the dog was thinking where the objective is and she was there, running and never on the wrong side of the wind. A couple of times Ed wanted to put her someplace but she was already on the way to the objective. She got behind one time but she went right out and took the hedge line and got buried in the woods and if that was a flaw, it was her only flaw. It was just one good move after another. At 58 minutes and about 300 yards out she pointed and corrected into a grapevine. Ed literally tore it apart limb by limb, finally, a lone quail flushed from the site. When we looked at her spaced out bird finds and quality of bird work, she was the winner.”

As I sketch my happy memories of Leipchen, along with her hunting prowess, she is remembered for her great little personality, fun loving, and companionable.

Also I would like to acknowledge those who contributed to her success. While I merely provided her with the opportunity to compete, the real credit goes to the “maestro” Ed Husser of Covington, Louisiana, and his lovely wife Linda. Ed fine-tuned “Leip” each season as only a master could. A special note of acknowledgement goes to the Buddendorffs who relinquished to me that special young friend. The contribution of their puppy was GSP-dom’s great gain. Don Paltani, her gracious and skillful scout, is also remembered with a special thanks in my heart.

I want to thank the Shorthair fraternity who have so graciously honored Leipchen Buddendorf by voting her into the German Shorthaired Pointer Hall of Fame.