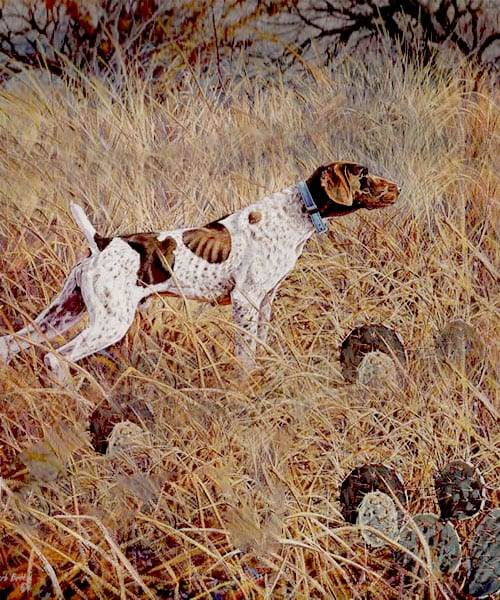 Uodibar’s Koonas was the product of a mating between Dixieland’s Rusty and Uodibar’s Dirty Gerty. He was whelped on May 25, 1983, and died on June 10, 1996. Koonas was bred, trained, and handled by John Rabidou of Honda, Texas and owned by Don Coller of Bloomington, Indiana.

By the Spring of 1984, Uodibar’s Koonas was winning puppy and derby stakes in Shorthair competition from Louisiana to Michigan. Koonas continued his winning ways annexing the title of National German Shorthaired Pointer Association (NGSPA) Champion in 1986 and winning the German Shorthaired Pointer Club of America (GSPCA) National All Age Championship the same year. He then annexed the title of NGSPA Pheasant Champion in 1987 along with taking runner up in the National German Pointing Dog (NGPD) Championship in 1987, the NGSPA Quail All-Age Championship in 1988, and the NGSPA National Championship in 1988 and 1990. Koonas had a total of 23 placements in NGSPA American Field competition.

In American Field competition, Uodibar’s Koonas produced 47 dogs with a combined record of 237 placements. Ten of these dogs either won or went runner up in championship competition; these dogs include Baron V Blitzkreig who won the NGSPA National Championship in 1993 and 1994 and Uodibar’s Jitterbug who was the 1996 NGSPA Shooting Dog Champion. Additionally, Uodibar’s Koonas sired numerous winners in the German Shorthaired Pointer Club of America (GSPCA) American Kennel Club competition with forty of his progeny having AKC titles including Alamo Magic, the 1996 GSPCA National All-Age Champion and Uodibar’s Stub A Dub, the 1991 Shooting Dog Champion. Most important, Uodibar’s Koonas continues to impact this breed. To date, 99 of his grand get have achieved 119 AKC titles in field trials and hunt tests with more joining the rank each year.

The field trial winning and production record of Uodibar’s Koonas makes him most deserving of being elected to the German Shorthaired Pointer Field Trial Hall of Fame.