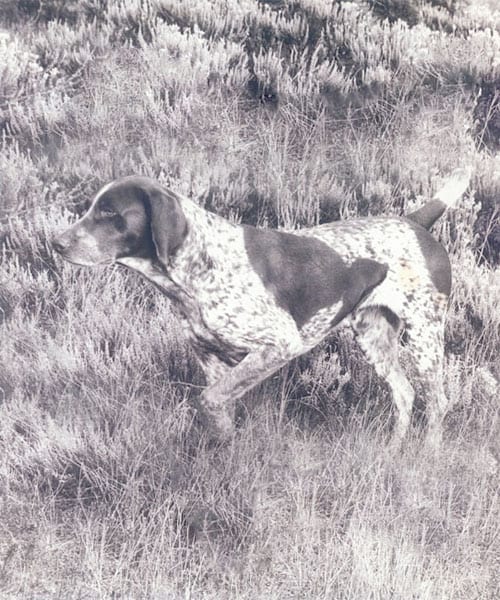 Von Thalberg Fritz II, bred and owned by Donald A. Miner of Saratoga, California, was a product of a mating of Field Champion Greif Von Hundscheimerkogel and Von Thalberg’s Katydid, a Greif granddaughter. Fritz was whelped on September 10, 1955, and died fifteen years later on August 24, 1970. Being strongly line bred, Fritz received an ample allotment of “Grief’s” well-known prepotency.

Don Miner described Fritz as a loveable and happy pup who was a natural from the day he was born. Fritz went to his first trainer, Sal Curci, at ten months of age and immediately won puppy and derby stakes. At about 18 months of age Fritz showed signs of illness and was subsequently diagnosed with heartworms. The University of California at Davis (UC Davis) accepted Fritz for free as a special patient because they were doing research on cures for heartworms. As a result of the special care given Fritz at this premier Veterinary school, he was the first dog known to have survived heartworms.

Fritz recovered in time to train for the fall 1958 trials but again showed further signs of illness. He was placed at UC Davis for another three months where he was treated for Nocardia Astroides, a severe pulmonary infection, which was related to his bout with heartworms. He was not released until February 1959, spending essentially two years in treatment and recovery.

Fritz ran all age stakes in field trials in the fall of 1959 and finished his American Kennel Club (AKC) Field Trial Championship. He continued his winning ways through 1960 and, by this time, was the top winning Shorthair in the United States. His trainer, Sal Curci, described Fritz as a “wide running, stylish Shorthair. He is extremely trainable, and has the stability to be as loveable as a lamb in the house, and a tiger in the field.” When Sal Curci developed health problems, Don Miner, loyal to his trainer, hoped that the health issues would be resolved. Unfortunately, they were not, and Fritz was run only sparingly after this point in time.

Although Fritz’s field trial career was cut short, it was spectacular. In fact Clark Gable employed a “talent scout” to find a field dog for him and offered to buy Fritz for a considerable sum of money. Fritz clearly earned the admiration of a number of field trialers, who chose him to mate with their outstanding females. The resulting progeny are the true source of the lasting legacy of Fritz II, and it is this legacy that recommends him to the Hall of Fame.

Fritz’s Grand-Get had an amazing record of five National Champions. Six German Shorthaired Pointers with Fritz represented in the fourth generation of their pedigree won national championships. Most important, the photograph of three German Shorthaired Pointers—Ammertal’s Lancer D, Erlicher Abe, and Ammeretal’s Kitt v. Shinback—whose picture are mounted in the Shorthair Hall of Fame exhibit at the Bird Dog Foundation in Grand Junction, Tennessee, have Fritz in their pedigree. Seldom has nature endowed an animal with the ability to perform with the best as well as produce with the best.