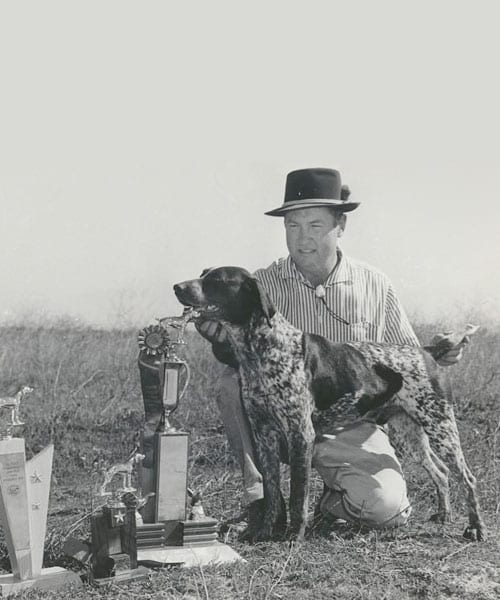 Donald A. Miner grew up hunting quail, pheasant, and deer. Early on he had a desire to own an all-purpose pointing dog that was a natural retriever, but he lacked the money to buy one. While serving with the Navy’s Pacific Fleet during World War II, he researched all-around hunting breeds in America and settled upon the German Shorthaired Pointer. He wrote the German Shorthaired Pointer Club of America in 1944 seeking the names of top breeders. Jack Shattuck of Schwarenberg Kennels, one of the top Shorthair Kennels in the 1940s, answered his letter and after the war assisted him in securing a pup from his breeding.

After building a successful career in the business world, Don earned a Master of Business Administration from Stanford University and then taught finance for 30 years at San Jose State University. In 1946 he founded Von Thalberg Kennels meaning in German “where the mountains meet the valley” which described his home area of Saratoga, California. His philosophy was to breed the best, and he was convinced some of the best were in Germany. He imported 17 German dogs over the years, many with the help of Bob Holcomb, a bird dog friend, who was stationed in Germany with the military until the late 1950s.

In his desire to improve the Shorthair’s hunting attributes, he turned to field trials to prove the results of his breeding program, beginning with walking field trials and later migrating to horse-back trials once they became accessible. He supported a number of professional trainers including Sal Curci, Bob Holcomb, and John Merrell. Although he sold an estimated 1,500 Shorthairs to buyers who initially purchased their pup for hunting, many of them subsequently became field trialers.

The list of accomplishments of Von Thalberg bred dogs is extensive and includes many winning Shorthairs. A top producing, pre-potent sire, Von Thalberg’s Fritz II sired four National Field Champions and many more that placed in both American Kennel Club and American Field Nationals. In the 1950s Don utilized an extensive amount of Field Champion Greif v. Hundscheimerkogel, an Austrian import, in his breeding program, and this continued development of the Greif bloodlines produced some of the best Shorthairs you could purchase anywhere in the world.

Don founded the German Shorthaired Pointer Club of Santa Clara Valley in 1952 and served on the board of the German Shorthaired Pointer Club of America from 1965 until 1976. For over 35 years he was involved at the grass roots level helping to put on and to run countless field trials. He was also heavily involved in the establishment of the first National Championship field trial for Shorthairs and was a tireless worker for the sport and the advancement of the breed.

Don Miner not only was one of the top German Shorthaired Pointer breeders of all time, but he also gave of his time, money, and significant administrative abilities to the sport he loved. His name may be little known to today’s competitors and breeders, but his legacy has endured in the many Shorthairs of today with Greif blood, the success of the organizations in which he played an important role, and the many field trialers he influenced during his nearly 40 years in the sport. He is without question deserving of election to the German Shorthaired Pointer Field Trial Hall of Fame.