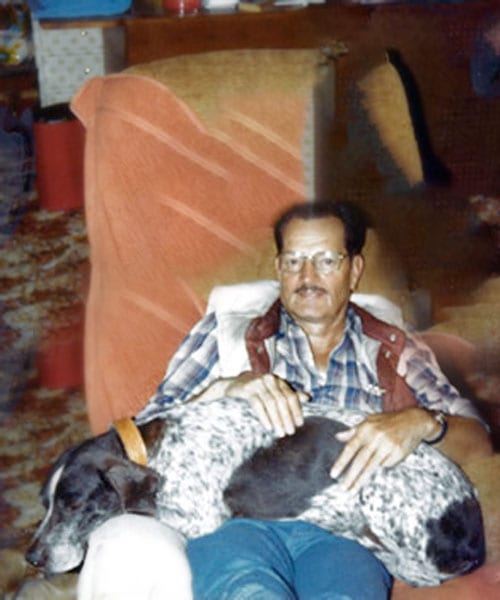 Raised in Illinois, Frank early on had a love of hunting dogs. After serving in the United States Army in World War II, Frank received an engineering degree. He began a career with Electro-Motive, Inc., a subsidiary of General Motors in Illinois. Frank then moved to Albuquerque to work for Sandia National Laboratory. Subsequently, he owned and operated very successfully the Alexander Construction Company where he developed and owned numerous apartment complexes as well as other real estate developments in the Albuquerque area.

Frank purchased his first field trial German Shorthaired Pointer in 1950 for $300.00 at which time his wife, Violet, exclaimed “that is a lot of money for a dog.” Frank began to field trial in his home state of Illinois and after his move to New Mexico, field trial continuously from that time forward until his death.

To walk into Frank’s trophy room was an experience in itself. Starting on the top shelves, you would see fourteen trophies from his dogs’ national wins and placements at the German Shorthaired Pointer Club of America (GSPCA) at Eureka, Kansas, the National German Shorthaired Pointer Association (NGSPA) at Booneville, Arkansas, and the National German Pointing Dog Association (NGPDA) at Green River, Illinois. You could not count the species and regional trophies in his office. His most prized trophy of all was the one which depicted the win of his dog, “Little Big Man” in the 1976 NGSPA Quail amateur shooting dog stake at Ardmore, Oklahoma.

Frank founded the German Shorthaired Pointer Club (GSPC) of New Mexico and held numerous positions in this club over the years. He served as president of the Yucca GSPC, President of the NGSPA Region 12 Association, President of the NGSPA Chukar Association, and served as treasuer of the NGSPA for several years. Unknown too many, Frank provided funding to start the NGSPA Sharptail Association as well as financial support for many other regional organizations. The NGSPA awarded Frank its most prestigious recognition the “McGinnis Award” in 2003 for outstanding service to the German Shorthaired Pointer and the sport of field trialing.

If you asked his wife, Violet, what Frank loved most about the game, she would tell you that he loved handling his own dogs in field trials. He was a truly competitive individual who wanted to help better the breed, attract new individuals to the sport of field trialing, and improve the Shorthair as a bird dog.