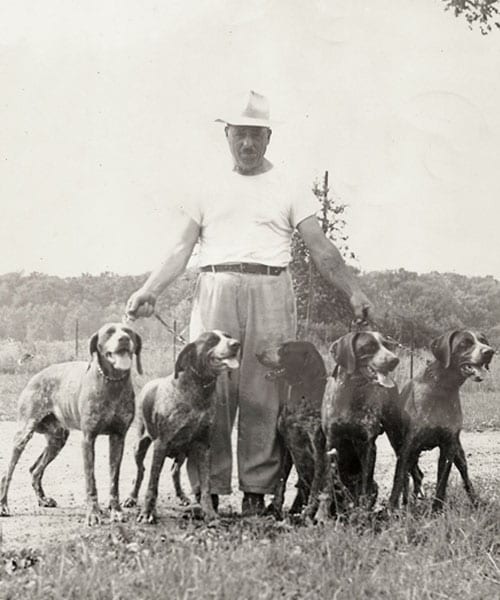 Born in Odense, Denmark, Hjalmar was interested in bird dogs from the age of eight when his father presented him with a German Shorthaired Pointer. It was by no accident that he spent a large part of his life breeding, training, handling, importing, and promoting Shorthairs.

Hjalmar was a carpenter by trade and immigrated with his family in 1928 to the province of Saskatchewan, Canada. He arrived in Canada in time for the great depression and a drought that lasted for nine years. During this drought while farming failed but wildlife thrived, he began training bird dogs.

While training many pointers and setters early on, he admired the ability of the Shorthair to adjust to different terrain. He was also quick to recognize the value and significance Joseph Burkhart of St. Croix Falls, Wisconsin, had made with many of his imports. In 1938 he acquired one of his great foundation dogs Timm v. Altenau from Dr. Charles R. Thornton of Missoula, Montana. Timm had the conformation which Hjalmer knew he needed to be successful in field and show as well as carry on a successful breeding program.

In 1939 Hjalmer and his family moved to Utica, Michigan, where he organized Fieldborn Kennels. He was freely available as a focal point for show, field trials, club or training services as well as a leader in developing clubs, stimulating breed shows, field trials, and in formulating national field trials. Hjalmer actually went on to win the first trial ever held to promote the German Shorthaired Pointer in April, 1940 with Fritz Von Schwarenberg.

Fieldborn Kennels flourished prior to and throughout the war period. After the war, Hjalmer Olsen was able to import many excellent dogs from his native Denmark. These dogs soon became the foundation of many leading kennels of that era and still impact Shorthairs today. He made 68 importations of German Shorthairs from Denmark. His interest in and methods of breeding made great strides forward with this new gene pool.

In 1952 Hjalmer returned to Denmark to further survey the Danish Shorthairs. He purchased and imported many Shorthairs but perhaps the greatest in terms of influence on the breed was Moesgaards Ib. Hjalmer made Moesgaards Ib, a Danish champion, the first international field champion. This dog went on to sire a number of great champions. The Moesgaards bloodlines extend into many Shorthair pedigrees and continue to produce dogs that are still winning in all aspects of the breed.

Eventually, Hjalmer Olsen wound up residing in Cordele, Georgia, where the weather and Bobwhite Quail made it ideal for training. Swanholm Plantation became a destination for many great dog owners and trainers still seeking Hjalmer’s influence and expertise. He still took time for extended visits to Denmark exporting many of the best Shorthairs in Europe to America.

Hjalmer Olsen was awarded the Danish Shorthair Club’s highest honor, a lifetime membership, for doing the most for the German Shorthair breed. Hjalmer was also the president of the first German Shorthaired Pointer Club (GSPC) in the United States founded in 1944. In 1946 the GSPC of Michigan was started and Hjalmer was elected as its first president. Hjalmer along with his son Bill help start the GSPC of Ohio, the GSPC of South Georgia, and the GSPC of North Florida, and they also served as officers of these clubs.

In the early 1960s Hjalmer’s health was failing. Still he demonstrated his enthusiasm for the breed by maintaining relationships with breeders, trainers, and handlers, giving advice and expertise when he could. Promoting the Shorthair was his passion. A quote from a letter he wrote late in life defines this passion: “You must remember that I have given my entire life to dogs. It has been the love of my life’s interest to work with them. I loved Shorthairs from when I was a little boy. I would lie awake nights trying to figure out plans to develop great dogs for competition. It is the same now. I have quit the game, but I still keep thinking about developing just one more winner of my own.”

Hjalmer Olsen died in 1972 in his native Denmark. The Fieldborn Kennel he started in Michigan is still operated in Cordele, Georgia, by his family.