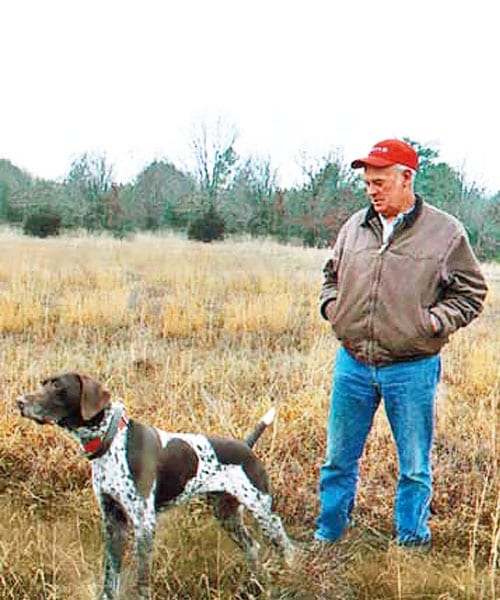 Robert H. Deitering, known as “Bob” to his many friends, was born and raised in Bancroft, Iowa. After two years in college Bob joined the United States Air Force in 1956. After his discharge from the military, Bob got his first German Shorthaired Pointer, “Maggie,” a solid liver female. She was the beginning of his fascination with the All-Age dog—always seen going away in the Chukar hills of eastern Washington. While Bob loved and produced the wide-going shooting dog, his heart was always all-age.

After moving to Spokane, Washington, Bob become involved with the Inland Empire German Shorthaired Pointer Club and worked for several years holding various club positions. Bob Holcomb, the importer of the Radbach line of German Shorthairs, was helpful getting Bob started as he learned from several professional trainers. In turn, Bob gave professional trainer Dan Hoke of Cheney, Washington, a hand when he started.

After the 1958 German Shorthaired Pointer Club of America (GSPCA) National Championships at Fort Huachuca, Arizona, he and his wife, Sandy, gave up the snow of Eastern Washington winters and moved to Huachuca City. Before moving, Bob loaded up a trailer full of dogs and went back to Arizona to train. It was there he entered his first National German Shorthaired Pointer Association (NGSPA) Regional Championship. It took one trial and Bob was sold on the hour stake. He won the Open Shooting Dog stake at Region 12 and then bought his kennel property.

Bob became active in the Southern Arizona German Shorthaired Pointer Club and was asked to manage the NGSPA Region 12 trial which became one of the largest in the United States. His wife, Sandy, took the position of club secretary and treasurer along with the food duties. They acted in that capacity from 1989 through 2004.

Bob’s ability as a dog trainer speaks loud and clear through his outstanding field trial record, especially as he was a frequent participant in the winner’s circle at field trials throughout the country. His accomplishments in both American Kennel Club and American Field venues are well-known, but he excelled with German Shorthaired Pointers in his ability to breed excellent dogs. He never forgot a pedigree or what the individual dogs were capable of producing. It was a proud day when Bob and Sandy’s Quailridge Roxy Roller joined the roster of the German Shorthaired Pointer Club of America’s Field Trial Hall of Fame. She was the producer of twenty- seven (27) field champions, amateur field champions, and National field trial champions.

One of Bob’s greatest impacts on the field trial world came from his tireless efforts and hard work. Sandy described his approach as “paying his dues” and he was relentless in that pursuit.

Bob’s peers remember him as a “thinking man’s dog trainer.” While he was an individual that did not waste words, he always had the time for newcomers to the game. Not surprisingly, a large number of current field trialers got their start with Bob’s advice and encouragement. He is missed.